#CalvaClub is more than just a competition.

Ugo Moretto won the 1st edition of the #CalvaClub with his "Globe-bouilleur" on May 31st.

At the begin­ning of the year, the Calvados pro­du­cers and ForGeorges.fr had an idea : invite all the France-based bar­tenders to post an ori­gin­al cock­tail video on the social net­works -> 1mn max­im­um.

With the global pan­dem­ic, morale is at half-mast. We have to smile again, and fast.

And for the bar lovers that we are, what could be better than launch­ing the com­pet­i­tion on Feb­ru­ary 14th.

But we also wanted to go beyond the simple cock­tail con­test and offer a new exper­i­ence to the participants.

The result: an incred­ible craze, recipes from the four corners of France, a crazy creativity.

The first selec­tion panel was there­fore faced with a dif­fi­cult choice. But in the end, 12 can­did­ates were invited to dis­cov­er the eco­sys­tem of Calvados in Normandy.

Bright sun­shine. (we had planned everything)

Arrival in the Pays d’Auge and first immer­sion in the cel­lars of the Château du Breuil.

Back from Le Breuil, the end of the day is quite “chill” on the ter­race of the Domaine du Grand Bec.

The day ends with deli­cious cock­tails : Calvados cock­tails, of course.

Before enter­ing the heat of the com­pet­i­tion, two detours are necessary. 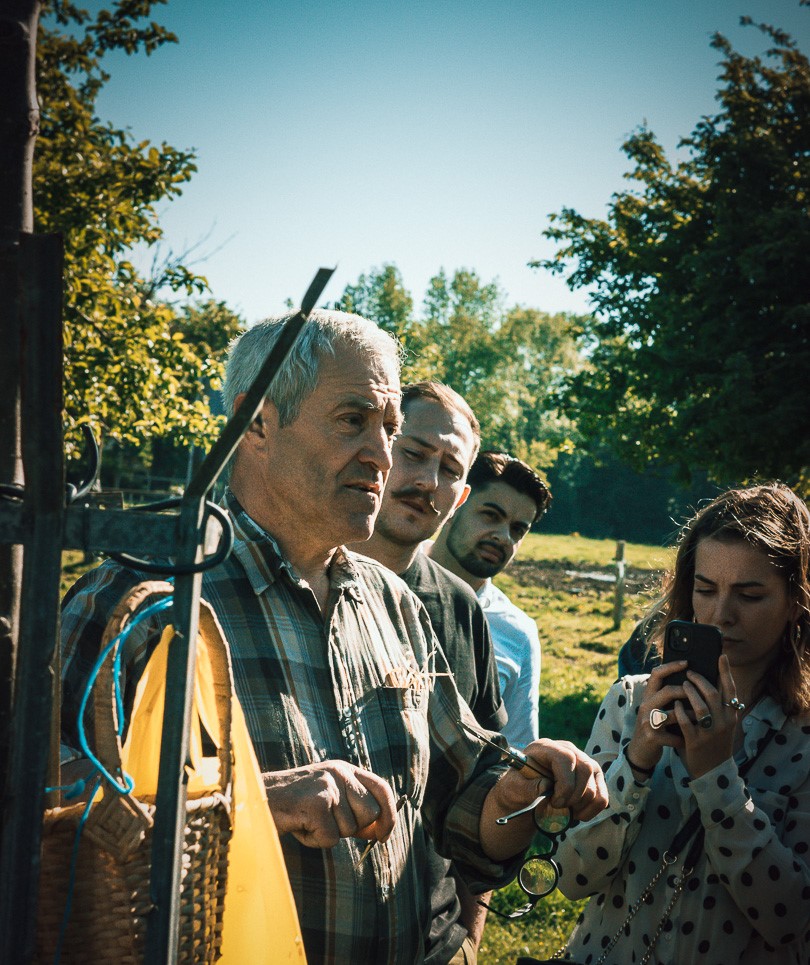 Deli­cious loaves of cider bread were served as part of our picnic under the apple trees. Baked in a tra­di­tion­al oven 👌

The com­pet­i­tion can start under the best auspices.

Back at the gîte, under a blaz­ing sun, each can­did­ate has 10 minutes to pro­pose 6 glasses.

Faced with the 5 jurors, the chal­lenge is sig­ni­fic­ant : explain the recipe in details, show some ped­agogy… and even answer a few trick ques­tions about Calvados (also in English).

Each can­did­ate did their best. And it was finally Ugo who was declared the winner for his “Globe Bouil­leur”, ahead of Lucas and Wes.

[All the can­did­ates’ recipes are avail­able in our cock­tails sec­tion.]

And to recov­er from all these emo­tions, there is noth­ing like a bit of sulky at the “Ecurie du Petit Paris”.

An incredible weekend, lots of memories.

Big up to César, Nico, Andres, Lucas, Mélissa, Cloé, Alex, Thibaut, Alessio, Wes, Flavio, Ugo and all those who con­trib­uted to the suc­cess of this event.

And thanks to the other 55 par­ti­cipants. We thought of you.

Thanks to ForGeorges.fr for the pic­tures and stuff.

Finally, we would like to thank the Normandy Region and the European Union for their support.

Founded in 1877 in Frênes by Pierre Garnier, this distillery nestled in the heart of the Normandy bocage is a…

To visit this website, you must be of legal age to purchase or consume alcohol. If there is no such legislation in your country, you must be at least 18 years old.

The abuse of alcohol is dangerous for your health, you must drink responsibly.